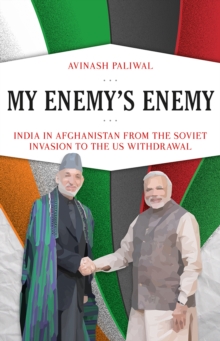 My Enemy's Enemy : India in Afghanistan from the Soviet Invasion to the US Withdrawal Hardback

The archetype of 'my enemy's enemy is my friend', India's political and economic presence in Afghanistan is often viewed as a Machiavellian ploy aimed against Pakistan.

The first of its kind, this book interrogates that simplistic yet powerful geopolitical narrative and asks what truly drives Indian's Afghanistan policy.

Based on an extensive repertoire of hitherto untapped primary sources including official memoranda, diplomatic correspondence, and a series of interviews with key political actors, My Enemy's Enemy provides a comprehensive analysis of India's strategy debates and foreign policymaking processes vis-a-vis Afghanistan, from the last decade of the Cold War to the 1990s Afghan civil war and the more recent US-led war on terror.

It demonstrates that Indian presence in Afghanistan has been guided primarily by an enduring vision for the region that requires a stable balance of power across the Durand Line.

Paliwal offers a nuanced understanding of India's strategic intent and actions, which is critical to resolving the seemingly unending war in Afghanistan, as well as wider bilateral disputes between the two South Asian rivals.