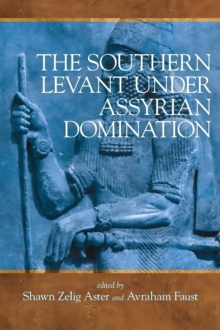 With its unique geographic diversity and abundant archaeological and textual data, the southern Levant is an excellent "laboratory" for studying how Assyrian domination operated.

This collection of essays explains how Neo-Assyrian rule influenced the demographics, economy, and culture of the region. A systematic study of Assyrian rule in the west that integrates archaeological and textual perspectives and reconsiders the "Assyrian Peace" paradigm has long been needed.

Building on the unparalleled archaeological and textual information available from the Land of Israel and its surroundings, the studies in this book address various aspects of Assyrian rule, including life under Assyrian hegemony and the consequences of the Assyrian conquests.

It includes a broad overview of the vast archaeological data from both the provinces and client kingdoms in the Land of Israel in the Assyrian period, as well as a systematic and chronological survey of Assyrian texts that mention the region or sites therein.

The contributors employ widely divergent approaches to topics such as the description of Assyrian encroachment in biblical texts, the Judean experience of Assyrian control, the political structure of the Coastal Plain, and the architecture of hospitality, among others.

Integrating various sources of information to reconstruct the demography, economy, architecture, and intellectual life of the southern Levant, the articles in this volume are important not only for the study of Assyrian rule but also for research on empires writ large. In addition to the editors, the contributors to this volume include Amitai Baruchi-Unna, Yigal Bloch, Alexander Fantalkin, Wayne Horowitz, David Kertai, Lily Singer-Avitz, and Peter Zilberg.