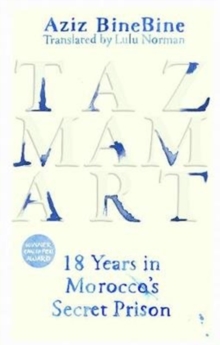 This is the true story of Aziz BineBine who, unwittingly entangled in a failed coup against King Hassan II, found himself locked in a small, underground cell in a prison thought to be a mere horror story: Tazmamart.

For 18 years, no one knew where the prison's inmates were.

No one knew if they were even alive. In many ways, they hardly were: confined for 24 hours a day, with the barest rations, no hygiene or medical help, and accompanied by cockroaches, scorpions, and tarantulas.

One of the few to survive, Aziz writes not only to tell his own remarkable story but to remember and honour the men that lived - and died - alongside him.

Against the backdrop of this unimaginable suffering, Aziz shows the strength of the human spirit to keep going against all the odds, to smile in the face of misery, and to forgive rather than condemn.

Set to become a cult classic of survival literature, Tazmamart is a hellish journey through the abyss of despair - and out the other side.