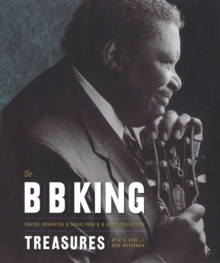 The B B King Treasures Hardback

by B B King

"BB KING TAPS INTO SOMETHING UNIVERSAL ...HE CAN'T BE CONFINED TO ANY ONE GENRE.

THAT'S WHY I'VE CALLED HIM A 'GLOBAL MUSICIAN,'" - ERIC CLAPTON.

Like a celebration thrown by B.B. for his countless fans, The B.B. King Treasures brings remembrances, photos, and rare and personal memorabilia together in a magnificent collection.

Numerous illustrations and 12 removable facsimile reproductions - among them a farming record from his old days as a Mississippi sharecropper and a postcard from a sixteen-year-old B.B. to his sweetheart - provide the atomosphere for the party.

The entertainment is a jam session, led by the King of the Blues himself, of rare and never before published quotes and stories from B.B., his friends, and people he worked with over the years, The 60-minute CD features two previously unreleased songs - one from B.B.'s first-ever recording session with ABC Records in 1962, the other from a 1971 London studio session - along with selected interviews.

The first illustrated book published by B.B.King, The B.B.King Treasures presents a one of a kind look inside the legacy of the foremost blues singer and guitarist of our time.

Since B.BKing started recording in the late 1940s, he has released more than 50 albums, many of them considered classics, and has become the most renowned blues musician of the past 40 years.

The recipient of numerous honours, he has been nominated for 24 Grammy Awards and was given a Lifetime Achievement Grammy in 1987.

In 1990, he received the Presidential Medal of the Arts.

He was an award recipient at the Kennedy Center in 1995.

In1996, he published his autobiography, Blues All Around Me, with coauthor David Ritz.