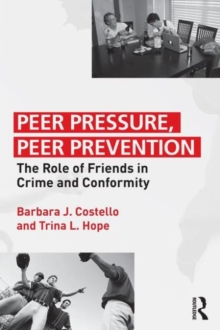 Criminological research has largely neglected the possibility that positive peer influence is a potentially powerful source of social control.

Quantitative methods tease out cause, effect, and spuriousness in the relationship between peer delinquency and personal delinquency, but these methods do little or nothing to reveal how and why peers might influence each other toward--or away from--deviance.

Costello and Hope take a first step toward uncovering the mechanisms of peer influence, drawing on quantitative and qualitative data collected from two convenience samples of university students.

Their quantitative analyses showed that positive peer influence occurs most frequently among those who associate with the most deviant peers and self-report the most deviance, contrary to predictions drawn from social learning theories.

Their qualitative data revealed a variety of methods of negative influence, including encouraging deviant behavior for others' amusement, a motive for peer influence never before reported in the literature.