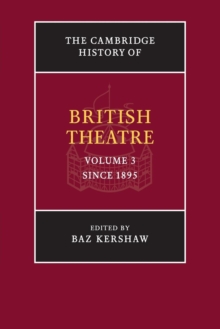 This volume explores the rich and complex histories of English, Scottish and Welsh theatres in the 'long' twentieth century since 1895.

Twenty-three original essays by leading historians and critics investigate the major aspects of theatrical performance, ranging from the great actor-managers to humble seaside entertainers, from between-wars West End women playwrights to the roots of professional theatre in Wales and Scotland, and from the challenges of alternative theatres to the economics of theatre under Thatcher.

Detailed surveys of key theatre practices and traditions across this whole period are combined with case studies of influential productions, critical years placed in historical perspective and evaluations of theatre at the turn of the millennium.

The collection presents an exciting evolution in the scholarly study of modern British theatre history, skilfully demonstrating how performance variously became a critical litmus test of the great aesthetic, cultural, social, political and economic upheavals in the age of extremes.