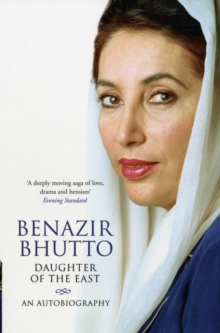 Daughter of the East: An Autobiography Paperback / softback

Beautiful and charismatic, the daughter of one of Pakistan's most popular leaders -- Zulfikar Ali Bhutto, hanged by General Zia in 1979 -- Benazir Bhutto is not only the first woman to lead a post-colonial Muslim state, she achieved a status approaching that of a royal princess, only to be stripped of her power in another example of the bitter political in-fighting that has riven her country.

From her upbringing in one of Pakistan's richest families, the shock of the contrast of her Harvard and Oxford education, and subsequent politicisation and arrest after her father's death, Bhutto's life has been full of drama.

Her riveting autobiography, first published in 1988 and now updated to cover her own activities since then and how her country has changed since being thrust into the international limelight after 9/11, is an inspiring tale of strength, dedication and courage in the face of adversity.