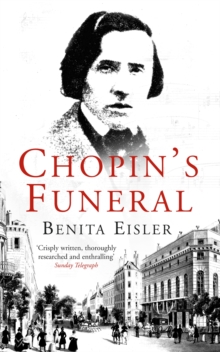 Both the life and music of this frail elegant man played out at the crossroads.

His decline and death following a series of catastrophes, particularly the breach with his lover Georges Sand and the ebb of his creative energy on the brink of a new style, were both final chapters in his often tragic life and reflected larger historical forces. CHOPIN'S FUNERAL is about a death foretold as the sum of other tragedies: the end of a world that fostered his particular genius; the wounds of exile and most fatally, the loss of love.

An intimate close-up of the composer's last years, it is also the story of the artist as hero.

At the close of his life, with no home or money, his physical powers failing, Chopin grappled with nothing less than a new musical form. CHOPIN'S FUNERAL is also the larger story of a great nineteenth-century city, Paris, in the grip of revolution.