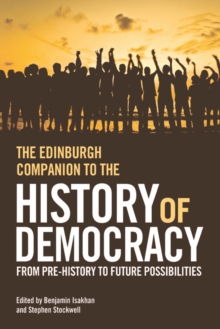 The Edinburgh Companion to the History of Democracy : From Pre-history to Future Possibilities Paperback / softback

This book re examines the history of democracy, broadening the traditional view with previously unexplored examples.

This substantial reference work critically examines the history of democracy, from ancient history to the directions it might take in the future.

Over the course of 42 chapters, it explores the full breadth of the origins of democracy and expands the canon of democratic history by exploring new - and sometimes surprising - examples from around the world.

Split into 9 parts, each part contains an introduction to the period followed by three to five case studies of specific governments or political movements.

This is the first book to study lesser known histories of democracy alongside familiar examples.

It includes historical accounts from leading scholars that document the development of democratic practices in their area or epoch of interest.