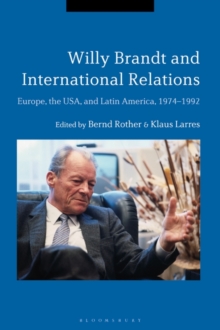 The editors have assembled a group of authors from Germany, the USA, Latin America and Europe to assess Brandt's important role in global affairs during the waning decades of the Cold War. The chapters follow Brandt beyond his resignation as Chancellor in 1974, after which he continued his position as chairman of Social Democratic party and became chairman of the Socialist International.

His international politics were above all focused on Europe, Latin America and the United States.

He was keen on finding new partners in the 'Third World' such as Latin America and the Caribbean, leading to conflicts with the U.S. administration which caused problems for West German foreign policy.

The authors also examine global challenges that occurred after 1989, such as Brandt's handling of German unification, the Kuwait crisis of 1991 and the first Gulf War. Willy Brandt and International Relations provides a new perspective on decades of Cold War relations and beyond through the work of an influential statesman and political thinker.

It is an illuminating book for students and scholars of the Cold War and international relations.