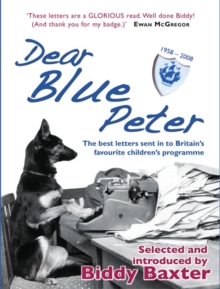 Blue Peter, which celebrates 50 years on television this year, means something to children of every generation from the 1960s onwards - whether it's the theme tune, the pets, the endless sticky-back plastic, or the legendary mishaps . But one little known aspect of the programme is the extraordinary correspondence it generated almost from the day that John Noakes, Valerie Singleton and co, first went on the air.

By the late 80s, Blue Peter was receiving an average of 7,000 letters per week. In this wonderfully entertaining book, Biddy Baxter - the programme's editor for 26 years, and the woman who used the Blue Peter badge to encourage children to write in with ideas, pictures and stories - reproduces some of the very best letters received. Original, engrossing, funny - and sometimes remarkably rude - they provide a unique record of life in the second half of the 20th century, of people all over Britain (and further afield) and children of every conceivable background.