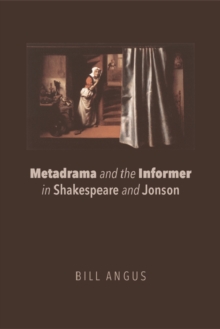 Metadrama and the Informer in Shakespeare and Jonson Paperback / softback

Explores disturbing connections between authors and informers revealed in the metadrama of Shakespeare and JonsonHave you ever wondered what was really going on in the inner-plays, secret overhearing, and tacit observations of early modern drama?

Taking on the shadowy figure of the early modern informer, this book argues that far more than mere artistic experimentation is happening here.

In case studies of metadramatic plays, and the devices which Shakespeare and Jonson constantly revisit, this book offers critical insight into intrinsic connections between informers and authors, discovering an uneasy sense of common practice at the core of the metadrama, which drives both its self-awareness and its paranoia.

Drama is most self-revealing at these moments where it reflects upon its own dramatic register: where it is most metadramatic.

To understand their metadrama is therefore to understand these most seminal authors in a new way.Key FeaturesOffers a fresh insight into the internal workings and motivations of Shakespeare and Jonson's dramatic structuresOpens a new window on the ambitions, concerns, and fears of these important authorsEnhances historical understanding of the structures of authority within which the drama was produced, and the place of the informer in those structures