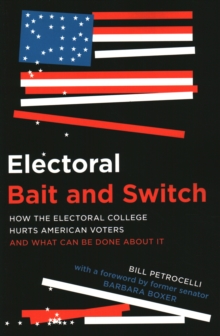 Electoral Bait and Switch : How the Electoral College Hurts American Voters and What Can Be Done about It Paperback / softback

It's a system that now fosters massive inequality in voting rights and opens the door to manipulation of presidential elections by foreign and domestic enemies of democracy.

Electoral Bait & Switch is prescriptive, and accessible to the general reader.

The current Electoral-Vote system presents a severe and growing threat to democracy in the United States.

It has thwarted the will of a majority of the voters twice in the last five presidential elections (2000 and 2016) by elevating to office a candidate who received only a minority of the vote.

This system is a distortion of the system envisioned by Alexander Hamilton, James Madison and the other framers of the Constitution.

If it is not challenged and overturned, we are likely to face a continual series of electoral and constitutional crises. The constitutional right of Americans to an equal vote in presidential elections is being violated by this system on a massive scale.

The value of an individual vote varies as much as three-to-one from state to state, and there are no two states where voters have the same voting-power.

The winner-take-all method of allocating Electoral votes also results in large pockets of "useless votes" and a system in which where you vote counts for far more than how you vote.

Most ominously, evidence is now clear that the Electoral-Vote system has opened the door for voter suppression and manipulation of elections by domestic and foreign conspirators.