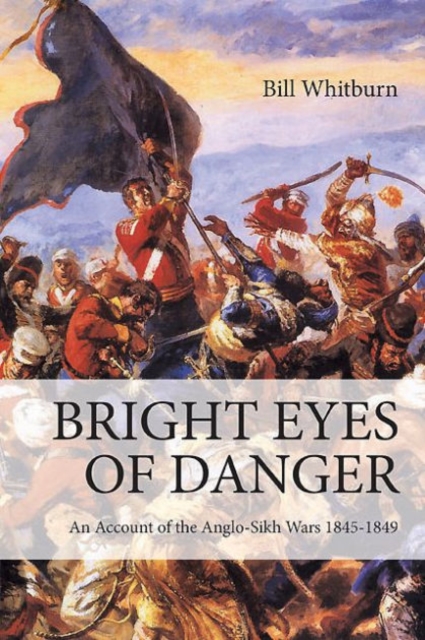 The Bright Eyes of Danger is rich in detail about the British advancement in India during the latter part of the eighteenth century thus becoming the paramount power over all India except for the Sikh Kingdom in the Punjab. it gives a vivid account of the seven battles and one siege of the two wars with the Sikhs.

The first being brought on by the demise of Maharaja Ranjit Singh, the machinations of palace officials and rapacity of the Sikh Army.

Despite traitors in command, the Sikhs gave the invincible British Army a run for its money.

The Battle of Ferozeshah was a closer run thing than Waterloo as the British Indian Empire stood at the brink of disaster. At the close of the first war many expected a British annexation of the Punjab, but the Governor-General, Sir Henry Hardinge, considered the Sikh real estate too large and expensive to take on, besides annexation would not play well back home.

He opted instead for a quasi-independent Sikh State, and in deference to the parsimonious East India Company Directors in London, he charged the Sikh State war reparations, annexed the most productive province of Jullundar and sold Kashmir to the 'biggest scoundrel in India' forGBP75,000. The second war erupted with a rebellion at Multan and the British Army advanced to battle with a new Governor-General and the same Commander-in-Chief, Lord Gough, whose catalogue of tactics did not extend beyond the awesome charge of British bayonets. but, this was not enough at the bloody onslaught of Chillianwala with both sides fighting to a stand still.

At Gujerat Lord Gough, with a greater number of guns than Wellington had at Waterloo, crushed the Sikhs into submission and the Governor-General, Lord Dalhousie, annexed the Punjab.

Having rocked the British Indian Empire at Ferozeshah, Ranjit Singh's soldiers helped save it during the Great Indian Mutiny, and later in both the World Wars.