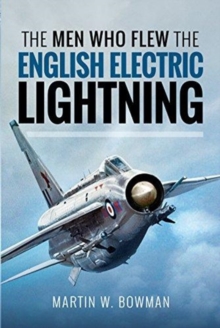 The Men Who Flew the English Electric Lightning Hardback

The early 1950s were a boom time for British aviation.

The lessons of six years of war had been learned and much of the research into jet engines, radar and aerodynamics had begun to reach fruition.

In Britain, jet engine technology led the world, while wartime developments into swept wing design in Germany and their transonic research programme were used to give western design teams a quantum leap in aircraft technology.

At English Electric, 'Teddy' Petter's design team were keen to capitalize on the success of their Canberra jet bomber and rose to the challenge of providing a high speed interceptor for the RAF. Martin W. Bowman describes the career of the Lightning in detail using first-hand accounts of what it was like to fly and service this thoroughbred.

Illustrated with over 200 colour and b/w photographs, appendices listing Lightning squadrons, production totals, individual aircraft histories and with the first in-depth analysis into why a third of all Lightnings were lost, _The Men Who Flew the English Electric Lightning_ is a fine record of the last truly great all-British fighter.