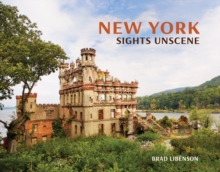 Part of the Sights Unscene series

New York - Sights Unscene is a wonderful collection of photography taken throughout the diverse and beautiful landscape of New York State.

The photographer, Brad Libenson has captured the unexpected and defining images of the "Empire State" and presented them to the viewer in an engaging and addictive tome. "Regardless of which state you choose to explore, one eventually discovers (and comes to admire) the certain qualities of that particular geographic cut-out that defines its particular sense of place.

Though each state reveals its special qualities and unique characteristics, certain states stand out by the sheer range of diversity and contrast in their people and environments.

New York excels as one of the few special states that embodies such an impressive gamut of cultural and geographic heterogeneity.

This of course makes it much easier to capture its essence on camera.

From the vineyards slipping down the shores of Lake Eire to those blanketing the North Fork of Long Island. From straining to glimpse the peaks of the Adirondack Mountains from the top of the Empire State Building and vise versa.

I just hope I was able to capture a fraction of the evoked feelings that made my journeys through this state a most incredible and pleasurable experience. And I hope you can feel it as well." Brad Libenson