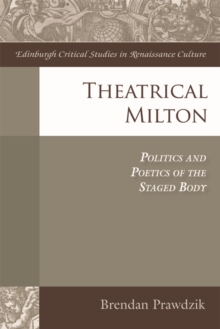 Theatrical Milton : Politics and Poetics of the Staged Body Hardback

Theatrical Milton brings coherence to the presence of theatre in John Milton through the concept of theatricality.

In this book, theatricality identifies a discursive field entailing the rhetorical strategies and effects of framing a given human action, including speech and writing, as an act of theatre.

Political and theological cultures in seventeenth-century England developed a treasury of representational resources in order to stage - to satirize and, above all, to de-legitimate - rhetors of politics, religion, and print.

At the core of Milton's works is a contradictory relation to theatre that has neither been explained nor properly explored.

This book changes the terms of scholarly discussion and discovers how the social structures of theatre afforded Milton resources for poetic and polemical representation and uncovers the precise contours of Milton's interest in theatre and drama.