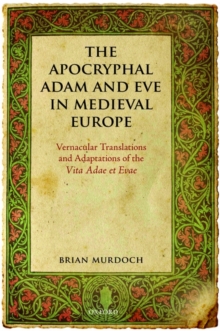 The Apocryphal Adam and Eve in Medieval Europe : Vernacular Translations and Adaptations of the Vita Adae et Evae Hardback

by Brian (Emeritus Professor of German, University of Stirling) Murdoch

What happened to Adam and Eve after their expulsion from paradise?

Where the biblical narrative fell silent apocryphal writings took up this intriguing question, notably including the Early Christian Latin text, the Life of Adam and Eve.

This account describes the (failed) attempt of the couple to return to paradise by fasting whilst immersed in a river, and explores how they coped with new experiences such as childbirth and death.

Brian Murdoch guides the reader through the many variant versions of the Life, demonstrating how it was also adapted into most western and some eastern European languages in the Middle Ages and beyond, constantly developing and changing along the way.

The study considers this development of the apocryphal texts whilst presenting a fascinating insight into the flourishing medieval tradition of Adam and Eve. A tradition that the Reformation would largely curtail, stories from theLife were celebrated in European prose, verse and drama in many different languages from Irish to Russian.