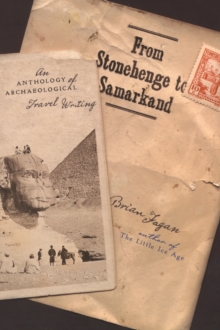 From Stonehenge to Samarkand : An Anthology of Archaeological Travel Writing Hardback

by Brian (Emeritus Profsesor of Anthropology, University of California) Fagan

Ever since Roman tourists scratched graffiti on the pyramids and temples of Egypt over two thousand years ago, people have travelled far and wide seeking the great wonders of antiquity.

In From Stonehenge to Samarkand, noted archaeologist and popular writer Brian Fagan offers an engaging historical account of our enduring love of ancient architecture-the irresistible impulse to visit strange lands in search of lost cities and forgotten monuments. Here is a marvellous history of archaeological tourism, with generous excerpts from the writings of the tourists themselves.

Readers will find Herodotus describing the construction of Babylon; Edward Gibbon receiving inspiration for his seminal work while wandering through the ruins of the Forum in Rome; Gustave Flaubert watching the sunrise from atop the Pyramid of Cheops.

Fagandescribes the early antiquarians, consumed with a passionate and omnivorous curiosity, pondering the mysteries of Stonehenge, but he also considers some of the less reputable figures, such as the Earl of Elgin, who sold large parts of the Parthenon to the British Museum.

Finally, he discusses thechanging nature of archaeological tourism, from the early romantic wanderings of the solitary figure, communing with the departed spirits of Druids or Mayans, to the cruise-ship excursions of modern times, where masses of tourists are hustled through ruins, barely aware of their surroundings. From the Holy Land to the Silk Road, the Yucatan to Angkor Wat, Fagan follows in the footsteps of the great archaeological travellers to retrieve their first written impressions in a book that will delight anyone fascinated with the landmarks of ancient civilization.