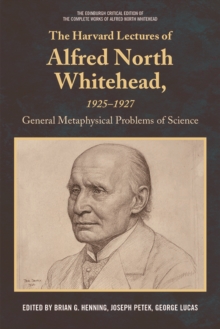 The first scholarly edition of critically edited, previously unpublished notes of Whitehead's philosophy lectures from 1925 to 1927 Reproduces more than 170 lectures delivered by Alfred North Whitehead during his 2nd and 3rd years at Harvard Provides a window into the development of Whitehead's thought in the lead up to the publication of his most significant work, Process and RealityReproduces the drawings Whitehead created on the board in class providing new insights into his thinking - invaluable because his published works include no diagrams For the first time, Whitehead's readers will be able to see the development of his philosophy during the crucial period between the publication of Science and the Modern World and his delivery of the Gifford lectures that would become Process and Reality, as he tests his theories in a classroom setting.

These student notes provide the long-missing window into critical developments in Whitehead's thinking during this time.

They challenge longstanding speculations about when exactly Whitehead developed some of his most famous metaphysical concepts, and how those concepts are to be properly interpreted against the wider backdrop of his life and thought. Also included is a transcript of the only known lecture Whitehead delivered on the topic of ethics, two mid-year exams given to his students and nearly 2,000 footnotes that provide additional context for the lectures and alternative student accounts of key passages.