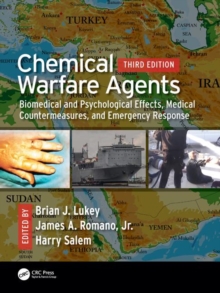 The first edition of this book, Chemical Warfare Agents: Toxicity at Low Levels, was published just prior to the terrorist attacks of September 11, 2001.

Since the second edition, the chemical warfare agent community has worked hard to advance research for protection and treatment and develop/improve response approaches for individuals and definitive care.

Consequently, in addition to updating previous chapters, Chemical Warfare Agents: Biomedical and Psychological Effects, Medical Countermeasures, and Emergency Response, Third Edition features several new chapters that address the Syrian War, chemical destruction, the Organisation for the Prohibition of Chemical Weapons, biomarkers for chemical warfare agent exposure, field sensors, aircraft decontamination, lung/human on a chip, chemical warfare response decision making, and other research advancements. Features:Describes the newest medical interventions, and the latest technologies deployed in the field, as well as developments in the international response to CW usage highlighting recent events in the Middle East Discusses the latest in organizational/interagency partitioning in terms of responsibilities for emergency response, not just in the United States but at the international level-whether prevention, mitigation, medical care, reclamation, or medico-legal aspects of such responseContains the most current research from bench-level expertsThe third edition contains the most up-to-date and comprehensive coverage of the question of chemical warfare agent employment on the battlefield or in terrorism.

Edited by workers that have been in the field for 35+ years, it remains faithful to the scientific "constants," while evaluating and crediting the advances by the industry that have made us safer.