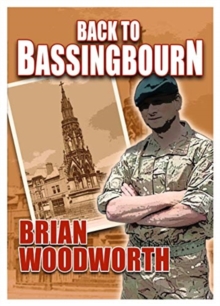 Back to Bassingbourn Paperback / softback

Brian Woodworth was born in 1968 and became one of England's longest serving funeral workers.

He has clocked up 35 years of service working in the Salford area of Manchester.

His first book 'Wooden Overcoat' went into great detail, telling the story of his working life.

It is a life working in death and sold copies all over the world, but that wasn't his first choice of career.

His latest book 'Back to Bassingbourn' takes a nostalgic look through his childhood, growing up in the small working-class town of Little Hulton.

It tells of his school days, enlisting in the Army in 1984 during a time of mass unemployment, and the often brutal regime of training within a British Army infantry regiment.

During his time at Bassingbourn Barracks near Royston, he met and married Pauline in 1987.

We then follow Brian through to his time with Greater Manchester Special Constabulary and subsequently his visits back to the place where it all began, 'Bassingbourn.''Back to Bassingbourn' will be for many, an emotional trip down memory lane that will rekindle memories from 1980's Britain. Brian and Pauline have four children and today live in Cheshire.

Brian dedicates this book to all the men, woman and dogs who defend our country, and to those who have given their lives in the service of their country, so that we can sleep safely in our beds.