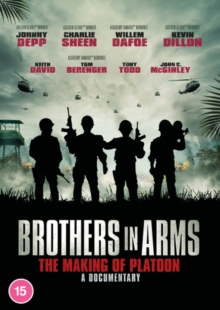 Brothers in Arms - The Making of Platoon DVD

Cast members including Sheen, Tom Berenger, Willem Dafoe and Johnny Depp reflect on their experiences of working with Oliver Stone, shooting the film in the Philippines, enduring intensive training for their roles and the bonds they formed during production.