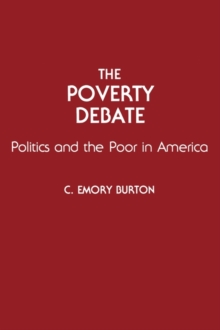 The Poverty Debate : Politics and the Poor in America Paperback / softback

Burton offers a thorough and thoughtful review of research and arguments concerning poverty in the United States.

He cites and summarizes the views of influential conservative thinkers and he provides solid evidence to defeat their arguments.

While conservative writers have traditionally presented the poor as lazy and unfortunate offshoots of a generally prosperous nation, Burton convincingly demonstrates that poverty in America is widespread and that it is not caused by a lack of ambition. The text begins with an overview of the true extent of poverty in America, including an examination of how poverty is defined and measured.

Burton then analyzes the cultural characteristics of the poor, the homeless, and the underclass.

He then turns his attention to welfare, workfare, and the generation of jobs.

A final set of chapters probes more deeply into the political dimension of poverty and the role of government in alleviating it.

Throughout the study, Burton refers to numerous influential works by conservative authors, and he deftly addresses their shortcomings.

An extensive bibliography adds to the usefulness of the text.

The result is a clear and comprehensive treatment of poverty in America.