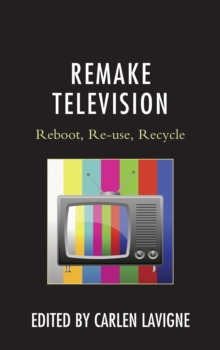 Remakes are pervasive in today's popular culture, whether they take the form of reboots, "re-imaginings," or overly familiar sequels.

Television remakes have proven popular with producers and networks interested in building on the nostalgic capital of past successes (or giving a second chance to underused properties).

Some TV remakes have been critical and commercial hits, and others haven't made it past the pilot stage; all have provided valuable material ripe for academic analysis. In Remake Television: Reboot, Re-use, Recycle, edited by Carlen Lavigne, contributors from a variety of backgrounds offer multicultural, multidisciplinary perspectives on remake themes in popular television series, from classic cult favorites such as The Avengers (1961-69) and The X-Files (1993-2002) to current hits like Doctor Who (2005-present) and The Walking Dead (2010-present).

Chapters examine what constitutes a remake, and what series changes might tell us about changing historical and cultural contexts-or about the medium of television itself.