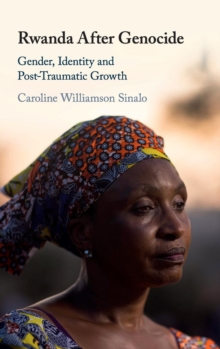 In the 1994 Rwanda genocide, around 1 million people were brutally murdered in just thirteen weeks.

This book offers an in-depth study of posttraumatic growth in the testimonies of the men and women who survived, highlighting the ways in which they were able to build a new, and often enhanced, way of life.

In so doing, Caroline Williamson Sinalo advocates a new reading of trauma: one that recognises not just the negative, but also the positive responses to traumatic experiences.

Through an analysis of testimonies recorded in Kinyarwanda by the Genocide Archive of Rwanda, the book focuses particularly on the relationship between posttraumatic growth and gender and examines it within the wider frames of colonialism and traditional cultural practices.

Offering a striking alternative to dominant paradigms on trauma, the book reveals that, notwithstanding the countless tales of horror, pain, and loss in Rwanda, there are also stories of strength, recovery, and growth.