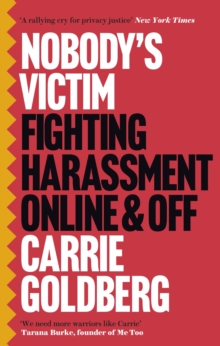 'We need more warriors like Carrie' Tarana Burke, founder of the MeToo movement

Nobody's Victim is an unflinching look at a hidden world most people don't know exists-one of stalking, blackmail, and sexual violence, online and off-and the incredible story of how one lawyer, determined to fight back, turned her own hell into a revolution.

Nobody's Victim invites readers to join Carrie Goldberg on the front lines of the war against sexual violence and privacy violations as her law firm sues the hell out of tech companies, schools, and sexual predators. Her battleground is the courtroom; her crusade is to transform clients from victims into warriors.

In gripping detail, Carrie shares the diabolical ways her clients are attacked and how she, through her unique combination of relentless advocacy, badass risk-taking, and unique client-empowerment, pursues justice for them all. There is the ex-boyfriend who made fake bomb threats in a client's name, causing a national panic; the girl who was sexually assaulted on school grounds and then suspended when she reported the attack; and the guy who used a dating app to send more than 1,200 men to his ex's home and office for sex. Carrie also shares her own shattering story about why she began her work and became the lawyer she needed.

Riveting and essential, Nobody's Victim is a bold and timely analysis of victim protection in the era of the Internet. This book is an urgent warning of a coming crisis, a predictor of imminent danger, and a weapon to take back control and protect ourselves-both online and off.

*Perfect for fans of She Said by Jodi Kantor and Megan Twohey, The Whisper Network by Chandler Baker and The Good Fight* 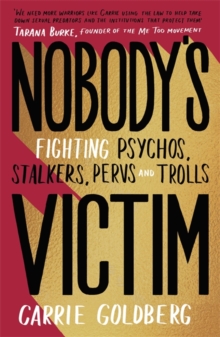