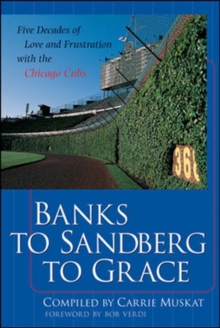 Banks to Sandberg to Grace: Five Decades of Love and Frustration with the Chicago Cubs Paperback / softback

'The Cubs haven't won a World Series since 1908, but more books have been written about them than any team except the Yankees.

Banks to Sandberg to Grace is one of the best' - Phil Tatman, "Orlando Sentinel".

The Chicago Cubs are one of the most beloved teams in all of sports, though not for their success on the baseball field.

The post- World War II years have been especially rough for the Cubs: they have been without a pennant since 1945 - longer than any team in the major leagues.

But devoted Cubs fans continue to faithfully follow their team each season, regardless of the result. "Banks to Sandberg to Grace" takes the reader on a nostalgic journey through the triumphs (few), the heartaches (many), and the lighter moments, as told by those who were actually there - on the field, in the front office, or behind the scenes.

In the more than 60 first-person stories spanning the last 50 years, each storyteller shares his or her personal, revealing account of what it was like to play or work for the Chicago Cubs.

Hank Sauer laughs about fans in the bleachers throwing tobacco at him. The team's longtime equipment manager, Yosh Kawano, talks about gaining the trust and friendship of players like Ryne Sandberg. And the late WGN-TV producer Arne Harris reminisces about sharing an earpiece with Jack Brickhouse and Harry Caray.

Cut from the cloth of memory, these warm, insightful stories make a perfect gift for Cubs fans, who, through love and frustration, remain forever faithful to their team and to the promise of 'wait 'til next year'. 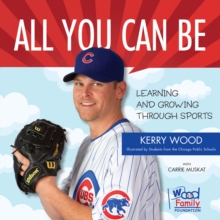 All You Can Be