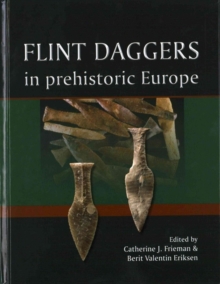 For more than a century flint daggers have been among the most closely studied and most heavily published later prehistoric lithic tools.

It is well established that they are found across Europe and beyond, and that many were widely circulated over many generations.

Yet, few researchers have attempted to discuss the entirety of the flint dagger phenomenon.

The present volume brings together papers that address questions of the regional variability and socio-technical complexity of flint daggers and their production.

It focuses on the typology, chronology, technology, functionality and meaning of flint and other lithic daggers produced primarily in Europe, but also in the Eastern Mediterranean and East Asia, in prehistory.

The 14 papers by leading researchers provide a comprehensive overview of the state of knowledge concerning various flint dagger corpora as well as potential avenues for the development of a research agenda across national, regional and disciplinary boundaries.

The volume originates from a session held at the 2011 meeting of the European Association of Archaeology but includes additional commissioned contributions.