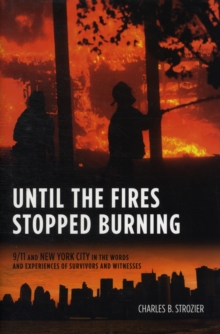 Until the Fires Stopped Burning : 9/11 and New York City in the Words and Experiences of Survivors and Witnesses Hardback

Charles B. Strozier's college lost sixty-eight alumni in the tragedy of 9/11, and the many courses he has taught on terrorism and related topics since have attracted dozens of survivors and family members.

A practicing psychoanalyst in Manhattan, Strozier has also accepted many seared by the disaster into his care.

In some ways, the grief he has encountered has felt familiar; in other ways, unprecedented.

Compelled to investigate its unique character further, he launched a fascinating study into the conscious and unconscious meaning of the event, both for those who were physically close to the attack and for those who witnessed it beyond the immediate space of Ground Zero. Based on the testimony of survivors, bystanders, spectators, and victim's friends and families, Until the Fires Stopped Burning brings much-needed clarity to the conscious and unconscious meaning of 9/11 and its relationship to historical disaster, apocalyptic experience, unnatural death, and the psychological endurance of trauma. Strozier interprets and contextualizes the memories of witnesses and compares their encounter with 9/11 to the devastation of Hiroshima, Auschwitz, Katrina, and other events Kai Erikson has called a "new species of trouble" in the world. Organizing his study around "zones of sadness" in New York, Strozier powerfully evokes the multiple places in which his respondents confronted 9/11 while remaining sensitive to the personal, social, and cultural differences of these experiences.