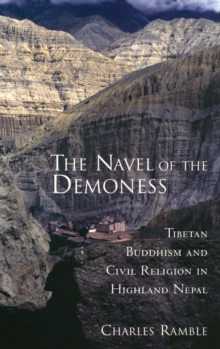 The Navel of the Demoness : Tibetan Buddhism and Civil Religion in Highland Nepal Hardback

In recent years both scholarly and popular interest in Tibet and its culture have seen a remarkable renaissance.

Yet Tibet and its culture remain shrouded in mystery.

This groundbreaking study focuses on a village called Te in a 'Tibetanized' region of northern Nepal.

While Te's people are nominally Buddhist, and engage the services of resident Tibetan Tantric priests for a range of rituals, they are also exponents of a local religion that involves blood-sacrificesto wild, unconverted territorial gods and goddesses.

The village is unusual in the extent to which it has maintained its local autonomy and also in the degree to which both Buddhism and the cults of local gods have been subordinated to the pragmatic demands of the village community.

Charles Rambledraws on extensive fieldwork, as well as 300 years' worth of local historical archives (in Tibetan and Nepali), to re-examine the whole subject of confrontation between Buddhism and indigenous popular traditions in the Tibetan cultural sphere.

He argues that Buddhist ritual and sacrificial cults are just two elements in a complex system of self-government that has evolved over the centuries and has developed the character of a civil religion.

This civil religion, he shows, is remarkablywell-adapted to the preservation of the community against the constant threats posed by external attack and the self-interest of its own members.

The beliefs and practices of the local popular religion, a highly developed legal tradition, and a form of government that is both democratic and accountable toits people - all these are shown to have developed to promote survival in the face of past and present dangers.

Ramble's account of how both secular and religious institutions serve as tools or building blocks of civil society opens up vistas with important implications for Tibetan culture as a whole.