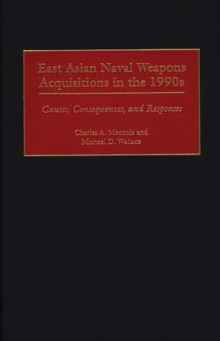 The role of the ocean as a highway for trade and a location of vital resources became critical to the region's economic growth.

Protection of territorial waters, the Exclusive Economic Zones established under the UN Law of the Sea, and strategic lines of communication grew in importance.

Soon, a significant change in the size and sophistication of many of the region's naval forces began to occur as they acquired modern weapons platforms (ships and aircraft) and weapons systems.

This study uses two approaches from quantitative arms race theory, the role of the armaments-tension spiral and that of enduring national rivalries, to examine the hard data on arms races in the region. The changing balance of naval forces has been interpreted in two very different ways.

One camp has viewed the development as a largely benign and justifiable modernization of naval forces for legitimate defense purposes.

A second camp has warned of a naval arms race in East Asia that will spawn armed conflict.

Both camps have often relied on anecdotal evidence and rhetoric.

While the argument was muted by the 1997 economic crisis, many naval projects have continued to move forward.

Meconis and Wallace address the meaning of East Asian naval weapons acquisitions in the 1990s in a more formal and serious manner than any previous attempts, and they propose measures that might prevent naval conflict.