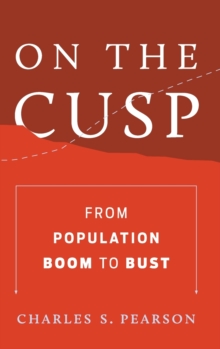 On the Cusp : From Population Boom to Bust Hardback

For much of its history, human population growth increased at a glacial pace.

In that 50-year span, the population grew more than it had in the previous 5000 years.

Though these raw numbers are impressive, they conceal the fact that the growth rate of population topped out in the 1960s.

The apparent population boom may be approaching a population bust, despite our coexistencewith more than seven billion people. In On the Cusp, economist Charles Pearson explores the meaning of this population trend from the arc of demographic growth to decline.

He reviews Thomas Malthus's famous 1798 argument that human population would exceed the earth's carrying capacity, and explains why this surfaces periodically when birth rates strongly exceed 2.1 children per household.

In many industrialized countries, the combination of an aging population and considerable food security may call for policies that boost fertility, immigration, and worker participation, reform pension schemes, and ease concern over moderating rates of population andeconomic growth.

Sharp and occasionally funny, Pearson's research has thought-provoking implications for future public policies. Pearson ends his analysis with a mildly hopeful conclusion, noting that both the rich and the poor face a new demographic order.

Bold and comprehensive, general readers and students alike will find On the Cusp an informative and engaging read.