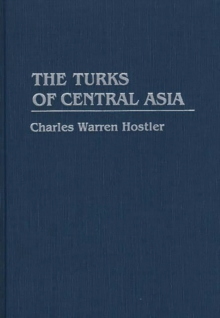 The Turks of Central Asia Hardback

This is a pioneering study which presents carefully researched data on the some 55 million Turkish-speaking peoples of the former Soviet Union and Central Asia.

The historical background of and the recent developments in Central Asia and the Trans-Caucasus are presented in detail.

Hostler's conclusions emphasize the present instability and the importance of Central Asia as well as the competing roles of Turkey, Iran, Russia and other countries. This unique book follows a standard, traditional historical approach.

Central Asia is a vast, little-understood area of great strategic, political, military, and economic importance, which could be a source of future world instability.

Scholars and policymakers will be interested in this source of updated and factual information about a little-known area of increasing significance.