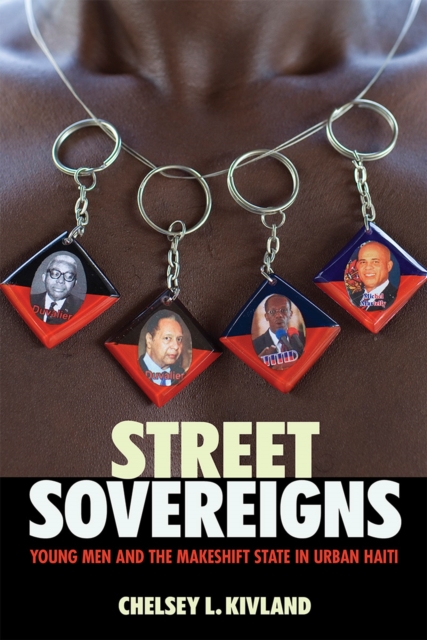 How do people improvise political communities in the face of state collapse-and at what cost?

Street Sovereigns explores the risks and rewards taken by young men on the margins of urban Haiti who broker relations with politicians, state agents, and NGO workers in order to secure representation, resources, and jobs for themselves and neighbors.

Moving beyond mainstream analyses that understand these groups-known as baz (base)-as apolitical, criminal gangs, Chelsey Kivland argues that they more accurately express a novel mode of street politics that has resulted from the nexus of liberalizing orders of governance and development with longstanding practices of militant organizing in Haiti. Kivland demonstrates how the baz exemplifies an innovative and effective platform for intervening in the contemporary political order, while at the same time reproducing gendered and generational hierarchies and precipitating contests of leadership that exacerbate neighborhood insecurity.

Still, through the continual effort to reconstitute a state that responds to the needs of the urban poor, this story offers a poignant lesson for political thought: one that counters prevailing conceptualizations of the state as that which should be flouted, escaped, or dismantled.

The baz project reminds us that in the stead of a vitiated government and public sector the state resurfaces as the aspirational bedrock of the good society. "We make the state," as baz leaders say.