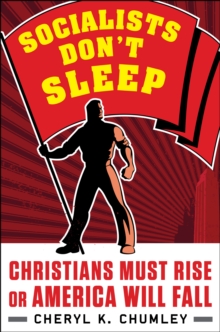 Socialists Don't Sleep is about all the sneaky ways the secular left has pressed Socialism into American politics and life - AND WHY CHRISTIANS ARE THE ONLY ONES WHO CAN STOP IT!"Socialists Don't Sleep is one of those timely books that just points out the roots of what's gone wrong in America, how we can get our country back on track to what founders envisioned and the Judeo-Christian community that holds the key to America's long-term successes." - Gov.

Per se. They're simply symptoms of the real problems that usher in Socialism: a dysfunctional entitlement-minded society, a propaganda-pushing school system, a decayed culture, a sieve-like border.

As Cheryl Chumley points out in Socialists Don't Sleep, we can't root out socialism unless we first address the real problems." - Michael Savage, New York Times Bestselling author & host of The Savage NationSocialists Don't Sleep: Christians Must Rise or America Will Fall tells how America has gone from a country of rights coming from God - NOT government - to a country that embraces Socialism - where the US government is now expected to pretty much provide from cradle to the grave.

Cheryl K. Chumley, an award-winning journalist and contributing editor to The Washington Times, explains how to return the country to its glory days of God-given, and why Christians, more than any other group, are best equipped to lead the way. "What is it about the founding principles of America that the secular progressive left would make better?

The answer is: Nothing. In her new book, Cheryl Chumley reminds us of those principles and calls on those who still believe in them to engage the failed policies and ideology of Socialism and atheism and to fight back." - Cal Thomas, Nationally-syndicated Conservative Columnist"If you think socialism will inevitably lose at the polls, think again!

As Cheryl shows in Socialists Don't Sleep, the far Left - in both political parties - has been eroding our freedoms for decades.

The long-term solution must come from the Judeo-Christian community.

If the churches don't rise, America is sunk." - Sam & Kevin Sorbo, Writer-Producer-Director Team for Let There Be Light "An important book that shows just how close our country is from losing its freedoms - and why the younger generations need to learn truthful history about capitalism, freedom, and socialism." - Will Witt, PragerU Personality"Socialists Don't Sleep exposes the flawed thinking of the socialist left." - Phil Robertson, New York Times Bestselling author & Star of Duck Dynasty