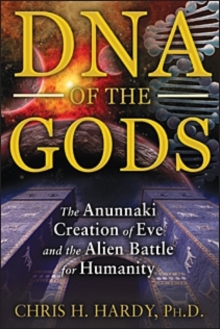 DNA of the Gods : The Anunnaki Creation of Eve and the Alien Battle for Humanity Paperback / softback

Further developing the revolutionary work of Zecharia Sitchin, Chris Hardy shows that the "gods" of ancient myth, visitors from the planet Nibiru, created us using their own "divine" DNA-first through DNA extraction from their own ribs' marrow and later by direct relations with early human females.

Drawing upon multiple sacred texts, Hardy details the genetic engineering of humanity by Anunnaki scientist Ninmah, with the help of Enki and Hermes.

She reveals how Ninmah's first female human creation, Tiamat/Eve, contained more alien DNA than the earlier male one, Adamu, and how the biblical Noah represents the perfection of her work.

Examining the war between Anunnaki brothers Enki and Enlil, Hardy reveals how the concepts of sin and the inferiority of women were born out of Enlil's attempts to enslave and then wipe out humanity, repeatedly thwarted by Enki and Ninmah.

The author further explains how the sacred sexuality taught to humans - still seen in Tantric practice - became suppressed millennia later by the patriarchal concept of original sin and how innocent Eve took the blame for the expulsion from Eden and fall from Grace.

Showing that the god who created us was not the same god who expelled us from Eden, Hardy explains that there will be no apocalypse because the Good/Evil duality has never truly existed - it has been only enemy gods fighting and implicating humanity in the wake of their own competition for power.

With a full psychological understanding of how the ancient "gods" have shaped humanity's ongoing history of conflict, we can move beyond the framework of "(my) Good versus (your) Evil" imposed by Enlil and begin to steer our own planetary destiny. * Explains the genetic engineering of humanity by an Anunnaki scientist Ninmah* Shows how the concepts of sin and the inferiority of women arose from Enlil's will to keep humanity underdeveloped, clashing with Enki's and Ninmah's plan to make us equal in intelligence* Reveals how humanity's long history of conflict was shaped by the battle between Enki and his brother Enlil