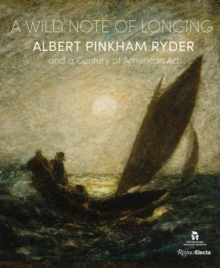 A Wild Note of Longing : Albert Pinkham Ryder and a Century of American Art Hardback

The brooding spirituality of his works, coupled with formal innovation decades ahead of its time, have long made Ryder a favorite of innovators like Jackson Pollock, Marsden Hartley, and Robert Rauschenberg. And yet, the artist s biography and practices remain elusive. A Wild Note of Longing whose title is taken from a Ryder poem--takes up the challenge, bringing a new generation of scholarship to the most comprehensive collection of Ryder masterworks assembled to date. Ryder is considered a seminal artist for both the late-nineteenth-century Gilded Age and for the emerging modernism of the early twentieth century.

This publication presents research from the last ten years including William Agee s recent work on Ryder s influence and context within modernism.

New evidence has also debunked some of the historical myths around Ryder, such as the degree of his elusiveness and social eccentricities and the lack of deliberateness with which he experimented with color and luminosity.

New perspectives include a deep focus on Ryder from the perspective of his hometown of New Bedford, Massachusetts.

This monumental project will represent multiple voices from leaders in the field on the continuing and ever evolving relevance of Albert Pinkham Ryder on modern art.