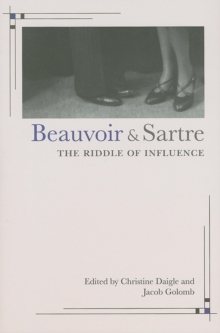 Beauvoir and Sartre : The Riddle of Influence Paperback / softback

While many scholars consider Simone de Beauvoir an important philosopher in her own right, thorny issues of mutual influence between her thought and that of Jean-Paul Sartre still have not been settled definitively.

Some continue to believe Beauvoir's own claim that Sartre was the philosopher and she was the follower even though their relationship was far more complex than this proposition suggests.

Christine Daigle, Jacob Golomb, and an international group of scholars explore the philosophical and literary relationship between Beauvoir and Sartre in this penetrating volume.

Did each elaborate a philosophy of his or her own? Did they share a single philosophy? Did the ideas of each have an impact on the other? How did influences develop and what was their nature?

Who influenced whom most of all? A crisscrossed picture of mutual intricacies and significant differences emerges from the skillful and sophisticated exchange that takes place here.