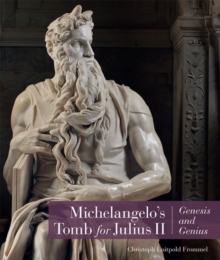 In 1505, Michelangelo began planning the magnificent tomb for Pope Julius II, which would dominate the next forty years of his career.

Repeated failures to complete the monument were characterized by Condivi, Michelangelo's authorized biographer, as "the tragedy of the tomb." This definitive book thoroughly documents the art of the tomb and each stage of its complicated evolution.

Edited by Christoph Luitpold Frommel, who also acted as the lead consultant on tge recent restoration campaign, this volume offers new post-restoration photography that reveal the beauty of the tomb overall, its individual statues, and its myriad details. This book traces Michelangelo's stylistic evolution; documents the dialogue between the artist and his great friend and exacting patron, Pope Julius II (who died long before the work was completed); unravels the complicated relationship between the master and his assistants, who executed large parts of the design; and sheds new light on the importance of Neo-Platonism in Michelangelo's thinking, which gave shape to the tomb's most famous statue, the Moses, and the work as a whole. A rich trove of documents in the original Latin and archaic Italian-many unpublished-relates the story firsthand through letters, contracts, and other records covering Michelangelo's travels, the purchase of the marble, the concerns that arose as work progressed, and numerous disagreements and negotiations.

The book also includes catalogues of fifteen sculptures designed for the tomb and more than 80 related drawings, as well as an extensive and up-to-date bibliography.