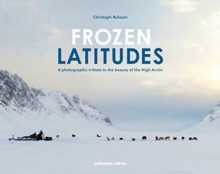 Frozen Latitudes : A Photographic Tribute to the Beauty of the High Arctic Hardback

The cryosphere is the frozen water part of the Earth`s system.

Areas of snow and ice which are subject to temperatures below 32F for most of the year, such as the Arctic, the Antarctic and the high mountain ranges.

These areas are under constant scientific examination, as the subject of global warming is of such significance today.

Christoph Ruhsam grew up in the high mountain cryosphere of Austria and has studied, explored and travelled extensively in the Arctic.

Also an expert landscape photographer, he sets out in this book to go beyond the scientific aspects of the frozen world, and through his essays and pictures capture the inherent spirit of these threatened lonely lands and oceans.

He uses three of his expeditions as the basis for the book, two to Greenland, and one to the Frans Josef archipelago.

His pictures reveal stunning vistas of unclimbed mountains and untrodden ice-sheets, the fauna and the scant flora, and beautifully record what could be lost to us all. The pictures are accompanied by descriptive essays that accompany the pictures and together attempt to convey the aesthetics of the Arctic landscape and the spiritual dimension in which Rusham believes the experience of loneliness and self-reliance needed to travel or work in these `frozen deserts` finds room in the depths of the travellers soul. The book is a superb ` cri de couer` to mankind to come to terms with its place in the world.