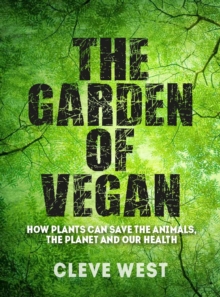 The Garden of Vegan : How Plants can Save the Animals, the Planet and Our Health Paperback / softback

Two things changed his mind: designing a garden for a hospital and adopting a vegan lifestyle.

Cleve's transition to veganism was a profound and varied learning experience.

He learned more about nutrition than when he studied it as part of a sports science degree.

He learned a great deal about propaganda in the food industry and how, contrary to what he'd been led to believe, the cows and chickens in the dairy industry are far from 'happy'.

He learned that animal agriculture is a leading cause of climate change and a whole range of environmental catastrophes.

He found that many illnesses have their origins in the consumption of animal products. He learned that a plant-based diet can alleviate some of these illnesses and sometimes even reverse them.

He learned that a drive towards a plant-based diet could offset many of the environmental aspects of animal agriculture and make a positive transition to a more sustainable future. Everything started falling into place. It was all about plants. Suddenly, his role as a garden designer didn't seem so trivial after all. The Garden of Vegan charts Cleve's journey from its tentative beginnings to an understanding of the restorative power of gardens and a realization that some of the most destructive aspects of the Anthropocene can be mitigated or even fixed by plants.