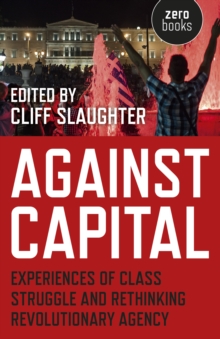 'The problem is not how to manage the capital system, but to get rid of it'. And who will do the job? These are the questions posed at the start of Cliff Slaughter's latest book.

Recognising the importance of Istvan Meszaros's analysis - in Beyond Capital (1995) and other books - of the historic, 'structural crisis' that has taken capital into its stage of 'destructive self-reproduction', Against Capital focuses on the crucial question of agency.

Today, when there are fundamental disjunctures between the globalised economy, the means of social control and political and state structures, what are we to make of Marx's conclusion that the working class - capital's only structural antagonist - is 'the gravedigger' of capitalism? And what are the implications for this of the information revolution, the changing composition of the working class, and the emergence of new forms of oppositional organisation, with young people to the fore?

Slaughter assembles contributions by participants in recent movements in South Africa, Britain, Spain, Mexico, countries in the former Soviet zone and - in a major contribution from Yassamine Mather - the Middle East. He offers an extended critique of 'vanguardist' conceptions such as Trotsky's 'the crisis of humanity is reduced to the crisis of working-class revolutionary leadership' and Kautsky's and the early Lenin's formulation that socialist consciousness must be brought to the working class 'from the outside'.

Finally, Against Capital examines the necessary theoretical foundations of a rebuilt working-class movement, with special attention to the concepts of class-consciousness and the relation between theory and practice.

This book is a compelling and distinctive contribution to recent debates encompassing works such as Thomas Piketty's Capital in the Twenty-First Century (2014) and Paul Mason's PostCapitalism (2015).