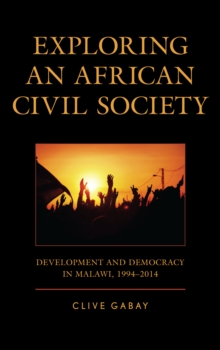 Are civil society organizations in Africa agents of democratization, legitimators of corrupt ruling elites, agents of imperial control, or all of these things and more?

Based on nearly five years of engagements with civil society organizations in Malawi, including interviews and broader ethnographic methods, this book presents a contemporary account of civil society activism in a country which provides some intriguing contextual background to these questions.

This effort appeared to pay off in the early 2000s with important development milestones being reached, and most spectacularly in 2011 when civil society organizations took to the streets in protest against the increasing authoritarianism of the democratically elected Bingu wa Mutharika.

This book takes a critical approach to the events which have marked out the post-1994 civil society journey in Malawi, from the disciplinary relationship between civil society organizations and international donors, to the political economy of the activism which has marked these organizations through the period.

In doing so this book reveals the ambiguities that plague the donor project in Malawi, with lessons for other African countries as well.

While this donor project may be more embedded now than it ever has been, this book illustrates how it continues to suffer from the deleterious effects of domestic class and international neo-imperial relations.