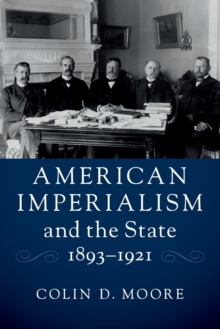 How did the acquisition of overseas colonies affect the development of the American state?

How did the constitutional system shape the expansion and governance of American empire?

American Imperialism and the State offers a new perspective on these questions by recasting American imperial governance as an episode of state building.

Colin D. Moore argues that the empire was decisively shaped by the efforts of colonial state officials to achieve greater autonomy in the face of congressional obstruction, public indifference and limitations on administrative capacity.

Drawing on extensive archival research, the book focuses principally upon four cases of imperial governance - Hawai'i, the Philippines, the Dominican Republic and Haiti - to highlight the essential tension between American mass democracy and imperial expansion.