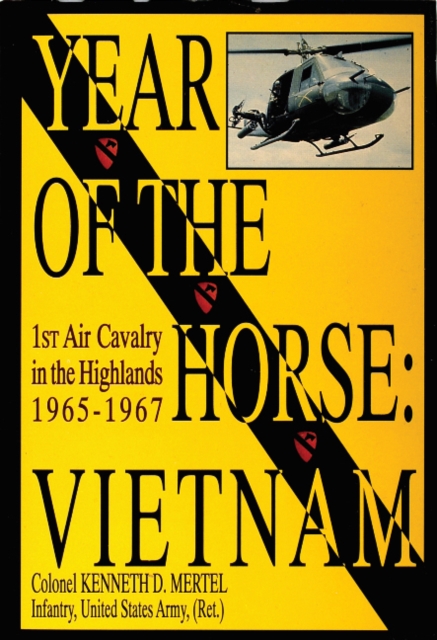 Year of the Horse: Vietnam-1st Air Cavalry in the Highlands 1965-1967 Hardback

After telling of the excitement at Benning over the formation of this revolutionary airmobile division, Colonel Mertel gives a vivid picture of the building of his own Jumping Mustang Battalion, the rigorous training of officers and men and, finally, the long voyage across the Pacific to Vietnam.

Now the test. Would the new concept of airmobility, so painstakingly worked out stateside, produce the hoped-for results?

The answer came quickly and dramatically in a rapid succession of search and destroy operations.

Ia Drang . . . An Khe South . . . Plei Mei . . . the Cambodian border . . . Bong Son . . . Tarzan . . . In precipitous mountains, dense jungles, mud and water-filled rice paddles and expanses of view-obstructing elephant grass, the Jumping Mustangs sought out the enemy, engaging him in combat and stopping him in his tracks.

Airmobility more than passed the test. Colonel Mertel pays tribute to the many acts of heroism of his men, who lived, worked and fought together in some of the world's most inhospitable conditions.

He also writes movingly of those who never came back.

In 1967 the President, at a White House ceremony, recognized the Division's success and valor by awarding it the Presidential Unit Citation for the action at Plei Mei.