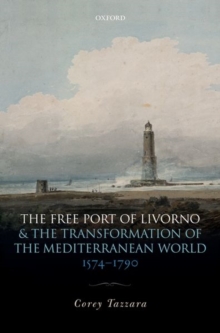 In the twilight of the Renaissance, the grand duke of Tuscany-a scion of the fabled Medici family of bankers-invited foreign merchants, artisans, and ship captains to settle in his port city of Livorno.

The town quickly became one of the most bustling port cities in the Mediterranean, presenting a rich tableau of officials, merchants, mariners, and slaves.

Nobody could have predicted in 1600 that their activities would contribute a chapter in the history of freetrade.

Yet by the late seventeenth century, the grand duke's invitation had evolved into a general program of hospitality towards foreign visitors, the liberal treatment of goods, and a model for the elimination of customs duties.

Livorno was the earliest and most successful example of a free port inEurope.

The story of Livorno shows the seeds of liberalism emerging, not from the studies of philosophers such as Adam Smith, but out of the nexus between commerce, politics, and identity in the early modern Mediterranean.