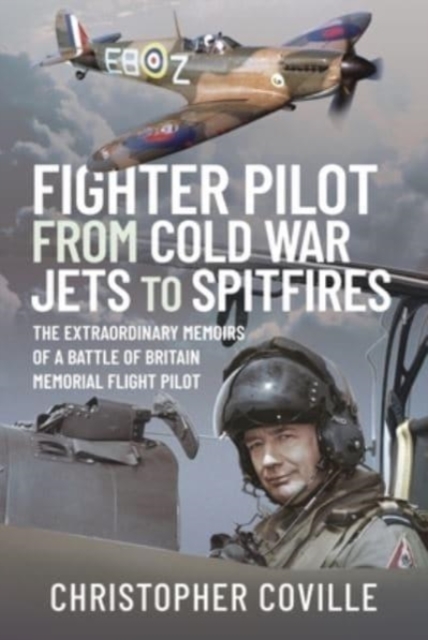 Fighter Pilot: From Cold War Jets to Spitfires : The Extraordinary Memoirs of a Battle of Britain Memorial Flight Pilot Hardback

A young boy sits in the back of a Chipmunk aircraft at RAF Woodvale, near Liverpool.

He has never flown in anything before. As the power goes on and the little aeroplane soars into a clear blue sky, he decides at once that this is the only thing he wants to do in life: to be an RAF pilot. _Fighter Pilot: From Cold War Jets to Spitfires_ tells the riveting story of how a boy from Liverpool, at the height of the Cold War, joined an RAF that was largely led by veterans of the Second World War.

Christopher Coville arrived at the RAF College at Cranwell to find an environment shaped by English Public School traditions, but he made the grades needed to be streamed onto fighters, and went on to fly the Lightning, Phantom and Tornado F3 in the air defence role. Christopher eventually became station commander of RAF Coningsby and while in that role flew with the Battle of Britain Memorial Flight, becoming the only station commander to qualify on the Hurricane, Spitfire and Lancaster.

He also qualified on helicopters and multi-engine aircraft and became responsible for the quality of the displays performed by the Red Arrows, flying with them regularly.

Along the way, he steered the RAF's biggest re-equipment programme since 1945 during a tour at the Ministry of Defence and filling a challenging top NATO post during the wars in the Balkans. While this is a book about a young man from Liverpool who joined from grammar school and became a three-star Air Marshal, it is also, above all, a story written by a passionate aviator, whose affection for flying leaps out of every line, in a book which is full of excitement, deep knowledge of flying and affection for his fellow servicemen and women.

But it is also a wonderful narrative about people, the great characters forged by military life, and honed by fear, exhilaration, and occasional tragedy. _Fighter Pilot: From Cold War Jets to Spitfires_ is a unique perspective on aviation, written by a talented and dedicated pilot at the very top table of the RAF.

This book culminates with his retirement, as the No.3 in the RAF, and being invited to have lunch with The Queen.