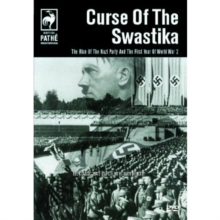 Curse of the Swastika DVD

This British Pathe documentary from 1940 illustrates the insidious rise of the Nazi Party from its post-WWI origins through to Adolf Hitler's plot to become the leader of the party and eventual dictator of his self-styled Third Reich.

The film also explores the twisted logic of the scapegoating of the Jews, the development of the Nazi concentration camps, the construction of the Siegfried Line and the dynamic tensions and botched compromises of all European inter-war politics that led to the annexation of Austria and the Sudetenland before the eventual declaration of war with the invasion of Poland.