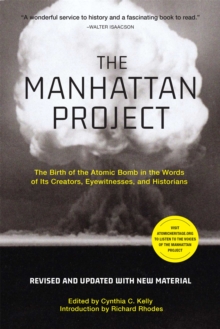 The Manhattan Project (Revised) : The Birth of the Atomic Bomb in the Words of Its Creators, Eyewitnesses, and Historians Paperback / softback

This updated edition of this essential collection of historic writings by the pre-eminent scientists and historians who bore witness to the birth of the modern nuclear age now includes President Barack Obama's 2016 statement at Hiroshima, all-new writings from Japanese survivors of the atomic bomb, and a new foreword by Cynthia C.

Kelly.Born out of a small research program that began in 1939, the Manhattan Project would eventually employ more than 130,000 people and cost a total of nearly $2 billion--all operating entirely under a shroud of secrecy.

This groundbreaking collection of essays, articles, documents, and excerpts from history, biographies, plays, novels, letters, and oral histories, newly updated on the occasion of the 75th anniversary of the bombings of Hiroshima and Nagasaki, is the first ever to source such primary history about the creation of the atomic bomb.

Included is President Barak Obama's 2016 statement at Hiroshima, as well as new perspectives from hibakusha (atomic bomb survivors) and the mayors of Hisorshima and Nagasaki.

The Manhattan Project is the most comprehensive exploration of the making of the atomic bomb available today.